Mr Basil Brown: quiet, humble, unhurried and the man who found the world.

The recent Netflix film tells the amazing story of the events that unfolded in deepest Suffolk 1938 – 1939. It is a delightful adaptation of John Preston’s novel, ‘The Dig’, rather than a straightforward dramatization of events. Having said that – that’s just what the novel is! John Preston is the nephew of Peggy Piggott and his justifiable pride in knowing his aunt found the very first gold on the dig at Sutton Hoo, must have motivated him to publish his 2007 novel.

It is my opinion that Ralph Fiennes did a great job of portraying Basil Brown, even tackling the Suffolk accent with some aplomb! As did Monica Dolan who played May Brown. It’s tricky – most performers and imitators in general, lapse into a West Country accent when they try, so well done to these two actors!

Peggy Piggott may have found the first gold…

It has been my privilege to be a volunteer and tour guide at the Sutton Hoo site for many years as a happy member of the Sutton Hoo Society. (By the way, for details on how to join the society see here.) As many people know the story of the Sutton Hoo treasure, with the release of this film I thought it a good moment to take a closer look at the legend that was Basil Brown. His life, even up to the events of global significance that he unearthed, was one of breath-taking inspiration.

Mr Brown has long been one of my heroes and I hope as this post reveals some of the real Basil it will be easy to see why.

Basil was born on 22nd January 1888 to tenant farmers George and Charlotte Brown, he was their only child. He attended Rickinghall Church School until the age of 12. By today’s standards we would describe him as growing up in poverty but, in contemporary English rural communities, leaving school at this age to scratch a living as a farmer was quite normal. He would not have dreamed he could access formal further or higher education. Leaving school in 1900 he was at the very tail end of the Victorian age, a long era of particular values that ran alongside great change and innovation. Those innovations were on the cusp of exploding into our own modern perceptions of fairness, democracy and comfort.

Fortuitously for us, posterity and Sutton Hoo Basil was rejected in 1915 from military service as medically unfit. Charles Phillips, who took charge of the 1939 dig mentioned in his book, ‘My Life in Archaeology’, that Brown had suffered ill health in his early years.

Lacking the right social credentials for higher education did not prevent this extraordinary man achieving his intellectual potential. After marrying Dorothy May Oldfield in 1923 the couple lived with Basil’s parents at Church Farm, Rickinghall. May, like her mother-in-law, took on the responsibility of the dairy and the chickens. By 1929 when Basil’s father passed away and the couple took over the Church Farm tenancy, Basil was already writing and submitting articles. These were chiefly concerned with astronomy. It was an exciting time to be writing about the discovery of a new planet – Pluto! His article on this, was published in the East Anglian Daily Times in 1930.

In 1932 Basil Brown published, ‘Astronomical Atlases, Maps and Charts’. It took him four years to write. Originally published by Search Publishing Co., it contained 200 pages, 19 plates and an impressive cover of brown and gold. That it originally sold for 18 shillings (£0.90) is astonishing when you observe that today, copies sell online for over £1000.00! The volume here is a later, reprinted edition published by Pall Mall in 1968. This originally sold for eight pounds and 10 shillings (£8.50).

As a child, Basil had studied the books of his great-grandfather Edmund on this and various other subjects and went on to become a collector and hoarder of books himself. His own aforementioned work then, was carefully researched and this was observed in a glowing peer review of 1933. Chris Durrant noted the following in his biography, ‘Basil Brown: Astronomer, Archaeologist, Enigma’;

“…the content was meticulously researched and was accepted as an important work with little scope for improvement beyond the most minor corrective detail.” (Durrant, p.8).

Basil never stopped learning. He spent time completing various correspondence and evening courses and taught himself languages. This is one of the main reasons he will always be a hero of mine. I came to higher education in my thirties and I continue as a mature student, now researching for a PhD, I love it! For me there is nothing like the quest for knowledge and the subject of history in particular, just gives and gives! It is never too late to learn. Basil had knowledge of geology and geography and became proficient in French, German, Spanish and Latin. Of course now, he is best remembered for his excellence in and passion for archaeology…

Having freely admitted to prioritising reading his books over tending his farm, Basil eventually decided to leave behind the grind of attempting to earn a living from farming.

“…it was said that more poppies grew in Basil’s fields than any crops…” (Durrant, p.15)

The couple existed on a combination of the small proceeds from Basil’s royalties and ‘odd-jobbing’ work and May Brown, affectionately known as Mrs Basil, took on local cleaning jobs and cared for other people’s children on top of her own commitments as a local reporter. She wrote for the, Bury Free Press, East Anglian Daily Times and Diss Express. (Durrant, p.10).

Although he will always be known, in the main, through his association with Sutton Hoo, Basil actually started with a keen interest in unearthing Roman remains. His enthusiasm sent him scouring the local countryside for anything he could find. His extensive knowledge of the Suffolk soil, due to growing up as a farmer, put him in exceedingly good stead. He was able to quickly identify minor differences revealed by the earth that exhibited any potential for further excavation. Anything he found was taken home and cross referenced with his book collection, enabling him to piece together the lives and hear the voices, of his beloved historical landscape.

“In fact, he was enthusiastic about any and every aspect of history ranging from local churches to his research on the Knights Templar. A further measure of his enthusiasm for digging may be gauged from the fact that one of his finds of a kiln in Calke Wood was made on Christmas Day (1934)!” (Durrant, p.14)

After the death of Basil’s mother, the couple lived for a short period at ‘The School House’ in Rickinghall and then in 1935 they rented ‘Cambria’ where Basil would remain for the rest of his life.

It was 1934 and Basil’s reputation in archaeological circles blossomed, his association with Ipswich Museum began. Under the then curator Guy Maynard, eventually Brown would take on freelance excavation work on Roman Kilns at Wattisfield and a Villa at Stanton Chair. Exhibits including coins, pottery, glass, tiles and oyster shells dug by Basil remain on display at Ipswich Museum to this day. His relationship with the museum would be a long and fruitful one.

It was this self-taught exceptional, and talented man to whom the wealthy land-owner Edith Pretty was referred in 1938 when she approached Guy Maynard with a curious intent to explore some mounds on her land…

Locally, Basil is remembered with a great deal of affection as someone who always had time to talk to people, to listen to them and advise them. He and May or, ‘Mrs Basil’ seemed fond of children but never had any of their own, many local children were in and out of the Brown house, often keen for Basil to identify bits and pieces they may have found – one wonders how many future archaeologists and historians were inspired by the couple!

“…other people’s children were always made welcome in their house… finds carefully wrapped, who came to seek out Basil’s opinion on a piece of pot or odd shaped stone they had found. Waiting patiently in the front parlour of ‘Cambria’, the room stacked floor to ceiling with books, many local children were thrilled to hear that their find was a piece of Roman pot or Neolithic flint.”  (Durrant, p.14)

I have learned a great deal about Basil Brown over the years as a volunteer at Sutton Hoo. I have taught visiting school groups about him, his achievements and techniques and I have talked endlessly about him as tour guide! Through Basil I have learned so much; from being inspired and proud to be a life-long learner and mature student, to love of my home county and pride in my local historical landscape and even connections to my ancestors – even if they haven’t all hailed from Suffolk! Basil Brown did not need to venture outside of Suffolk to discover the world, the sky, the land… He sought the giddiest of intellectual heights using a telescope, a trowel and some books – he found it all.

Basil died on 12th March 1977 at home in Rickinghall. His epitaph reads, “A good spade and patience.”

My first post in quite a while! Due to a combination of house renovation, lockdown, working on my PhD and …

Henry VIII was not the only Tudor prepared to throw contemporary convention aside and marry for love.  His younger sister …

Two of Henry VIII’s wives, Anne Boleyn and Katherine Howard ended their lives on the executioner’s block as traitors.  Another, …

A fresco, a celebration of a man who at the time occupied living memory, ‘the Canonisation of Saint Catherine’ is …

By exploring the attitudes towards myth, presented by the poets Homer and Hesiod, classical ‘scientists’ such as the Milesians …

These small, seemingly humble, items can often be overlooked and taken for granted, but they offer great insight into the …

A visit to Lindisfarne in Northumbria is well worth it. It feels remote and peaceful and boasts a fascinating history. … 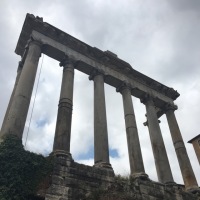